Sony today announced that several major global broadcasters and cinema exhibitors will broadcast and screen the 3D production of the Wimbledon 2011 men’s semi-finals, men’s final and women’s final in multiple countries and regions worldwide. Through its official supplier partnership with The All England Lawn Tennis Club to produce the final matches of The 125th Championships in 3D, Sony aims to deliver the exhilaration and excitement of the world’s premier tennis championships – with unprecedented depth and realism – to viewers worldwide. By capturing and broadcasting Wimbledon in stunning, live 3D, Sony aims to deliver each individual shot in even greater detail, and share the action and atmosphere of The Championships among a larger audience than ever before. 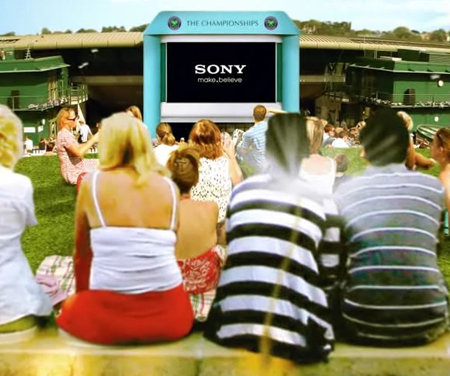 As of June 20, 2011, it has been confirmed that live public screenings of Wimbledon will be shown in 3D on more than 170 screens in the UK, Ireland, Spain, Italy, Norway, Greece, Turkey, Portugal, Belgium, Germany, Austria, US, Canada, China, Hong Kong, Indonesia, Brazil, Chile, Colombia, Ecuador, Peru and Uruguay – a total of 22 countries and regions.