RealD and Toshiba have entered into a marketing and promotions alliance for the upcoming feature film event Carmen in 3D, filmed at the Royal Opera House, Covent Garden. As part of the agreement, Toshiba will receive presentation rights for the film’s worldwide theatrical release and secures exclusive rights during a promotional period to package 3D Blu-ray Discs of Carmen in 3D with select 3D-enabled Toshiba brand consumer electronics, including TV, PC and Blu-ray devices. Additional marketing, promotions and public relations activities are planned in support of the alliance. 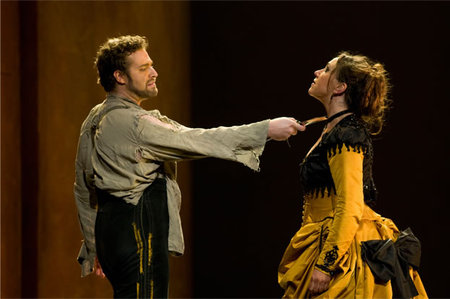 A co-production of RealD and London’s Royal Opera House, CARMEN IN 3D gives viewers the best seat in the house, taking them on a magic carpet ride into the heart of the production -immersing them into this exciting story of love, jealousy and betrayal. CARMEN IN 3D is a dazzling film, filled with some of the best-loved music ever written – and performed by a world-class cast. With English subtitles throughout, it is the perfect event for life-long opera fans and first-timers alike!