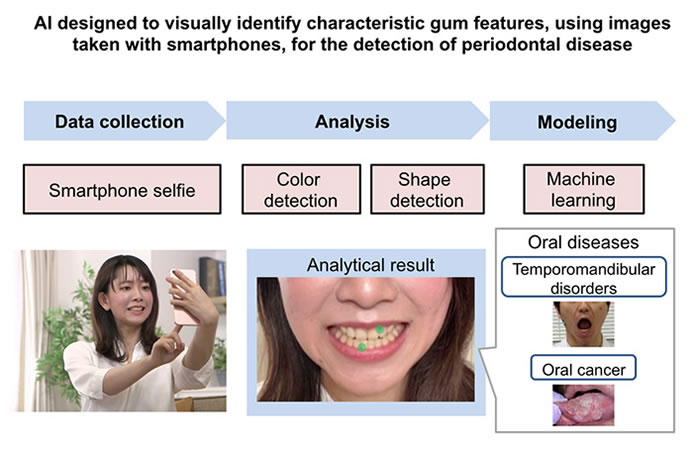 Japan based Tohoku University and NTT DoCoMo has begun researching an artificial-intelligence (AI) technology to detect periodontal disease simply by photographing a person’s gums with a smartphone. Periodontal disease can lead to tooth loss and lifestyle diseases such as heart disease, stroke, obesity and type II diabetes, so a solution for early detection could offer significant advantages, especially in aging societies. The simple, easily deployed smartphone-based solution proposed by Tohoku University and DoCoMo would analyze gum color and shape, compensating for photo brightness and camera shake, to determine the risk of periodontal disease. By helping users to understand their personal risks, the solution is expected to facilitate better communication with dentists and increased examinations aimed at preventing early-stage periodontal disease from becoming serious.

The aim of the newly announced collaboration is to develop a practical, everyday solution by combining DOCOMO’s expertise in AI technology with Tohoku University’s expertise in oral diseases and extensive data on medical examinations and research. The two partners also expect to apply their AI technology toward the detection of additional oral diseases, such as temporomandibular disorders and oral cancer. A device-based tool for determining disease risks is expected to be launched commercially by the fiscal year ending in March 2023. In Japan, periodontal disease is present in 61% of adults in their 20s, 71% in their 40s and 75% in their 60s, according to a survey conducted by Japan’s Ministry of Health and Welfare in 2016.