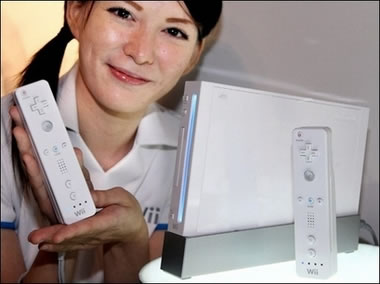 Kyoto-based Nintendo has said that 400,000 of its next-generation Wii game consoles would be available on launch in Japan next month, about four times the number of PlayStation 3s Sony managed to ship. Nintendo Wii hits the shelves in the US on Sunday for 249.99 dollars and in Japan on December 2 for 25,000 yen (212 dollars) — almost half the price of the PS3.Nintendo Co Ltd leads the global market in portable game machines and has been taking aim at Sony’s lead in stand-alone consoles. Nintendo is promoting the Wii as a family-friendly machine an easy-to-use controller and functions for everyone within a household such as leaving messages.

Nintendo aims to ship four million Wii game consoles worldwide by the end of the year and six million by March 2007.