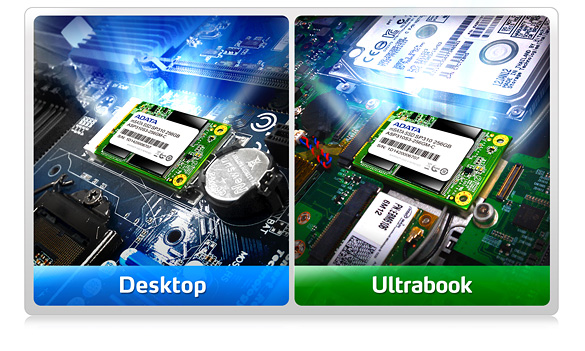 ADATA today announced the launch of the Premier Pro SP310 mSATA solid state drive. Targeting consumers who are looking for a cost-effective upgrade to the SATA III specification, the SP310 supports Intel Smart Re4sponse Technology (SRT), which permits for the use of an mSATA SSD as a cache drive in conjunction with a traditional hard disk. This hybrid configuration delivers speeds comparable to systems with SSDs as primary drive.

The SP310 mSATA solid state drive is a superb option for upgrading the performance of your laptop or desktop system. It brings all the advantages of solid state storage: reduced heat & noise, low power consumption, and of course increased transfer speeds of up to 410MB/sec read and 180MB/sec write. It can be utilized as a cache drive when used in conjunction with a hard disk drive, or serve as standalone primary storage (boot drive).

The ADATA Premier Pro SP310 offers read and write speeds up to 410 and 180 MB/sec respectively, with maximum 4K random write of 45,000 IOPS. Capacities of, 32, 64, and 128 gigabytes provide greater flexibility for system builders. The SP310 incorporates a JMicron JMF667 series controller. Features supported include S.M.A.R.T and NCQ command sets, and TRIM command. A 3-year warranty and a MTBF (mean time between failures) of 1,200,000 hours ensure long term usage free of worries.