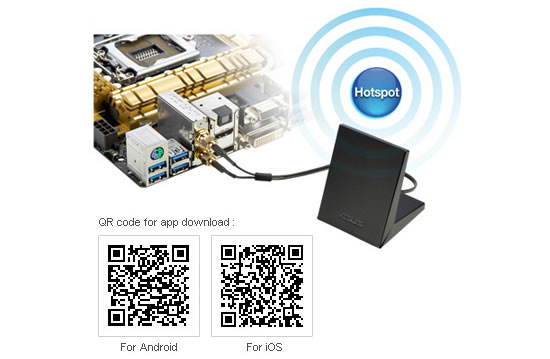 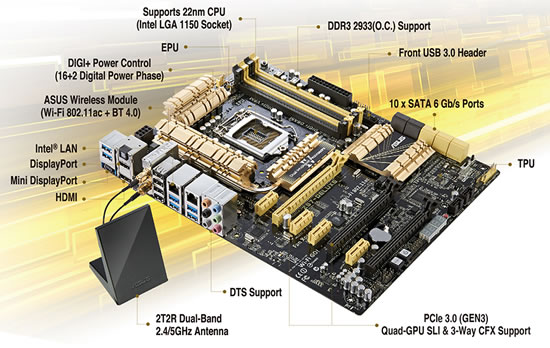 The original Thunderbolt standard has four separate transfer channels — two upstream and two downstream — with a maximum transfer rate of 10Gbit/s per channel. Thunderbolt 2 combines these four channels into two 20Gbit/s bi-directional channels, which are 4X faster than USB 3.0.Together with DisplayPort 1.2 support, this enables Thunderbolt 2 to simultaneously deliver extremely high-resolution video to the latest 4K/2K (4096 x 2160) displays and communicate with other bandwidth-hungry devices, such as hard drives. With the onboard HDMI port, ASUS Z87-Deluxe/Quad can drive three 4K UHD displays at once.

Asus Z87-Deluxe/Quad includes a number of exclusive ASUS technologies. Dual Intelligent Processors 4 with 4-Way Optimization is an easy-to-use tuning tool that dynamically adjusts performance and cooling for reduced noise and increased efficiency with a single click. The UEFI BIOS presents a friendly graphical interface, making it easier than ever to set up shortcuts and favorites for quick access to the options that are used most often.

Asus Z87-Deluxe/Quad also includes NFC Express, an accessory that can automate common PC tasks simply by tapping the supplied NFC tag or NFC-compatible smart devices to the box. NFC Express can be used for secure Windows user account login without the need to type in a password, and to launch multiple applications to create a particular working set-up. Using the free Wi-Fi GO! & NFC Remote companion app for NFC-compatible smart devices, users can also wirelessly synchronize photos and videos with their PC and remotely control the system with no complicated set-up in a tap.