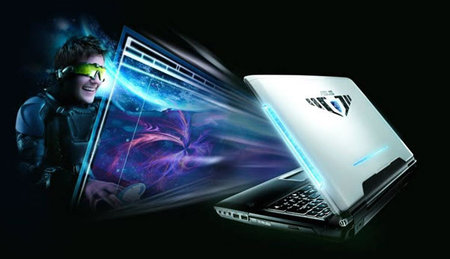 Asus today announced the launch of its 15.6-inch G51 notebook, a gaming powerhouse. Sporting a futuristic, robot-inspired ‘mecha’ design the Asus G51’s use of seamless gamer-centric interface elements and scorching gaming performance—both in the visual and audio departments—are a fitting recognition of the Republic of Gamers’ tireless and extensive efforts to deliver on its promise: Designed for gamers. The Asus G51 also boasts industry leading audio technologies that combine to envelope users in true-to-life surround sound for added gaming realism. Users who appreciate the G51’s gaming pedigree but prefer a slightly larger screen can opt for its 16-inch cousin, the ASUS G60. With the G51, Asus’ engineers have cleverly circumvented the thermal and placement issues that typically arise from fitting the NVIDIA GeForce GTX 260M into a 15-inch form factor, making it the world’s first 15-inch notebook to boast extreme graphics previously only viable on 17-inch notebooks. The Asus G51 and G60 each boast a tremendous 1GB of GDDR3 video memory, which is 30% faster than DDR2.

The Asus G51 and G60 notebooks are the world’s first notebooks to support EAX Advanced HD 4.0 audio technology, which enhances in-game environments and scenarios by providing true-to-life three dimensional sound effects. The Asus G51 and G60 provide up to 64 additional sound effects from the sound library. CMSS surround sound, together with high fidelity Altec Lansing speakers and a 16:9 Full HD display, enable the Asus G51 and Asus G60 to deliver a level of gaming and multimedia immersion that no other notebook can match.