Asus has launched an entire range of DirectCU II-enhanced graphics cards that include the latest technologies from both AMD and NVIDIA GPU rosters. On the AMD side, Asus offers the HD 6970 and HD 6950 graphics cards with DirectCU II while for NVIDIA, the GTX 580, GTX 570 and new GTX 560 Ti all ship with the advanced cooling technology. Based on Asus DirectCU, which uses copper heat pipes in direct contact with the GPU core for up to 20% cooler performance, DirectCU II adds a custom cooler that uses twin 100mm fans for a massive 600% increase in airflow on HD 6970, HD 6950, GTX 580, and GTX 570 DirectCU II cards. ASUS has also launched the GTX 560 Ti DirectCU II TOP graphics card with dual 80mm fans for the best performance in its segment through doubled air power. 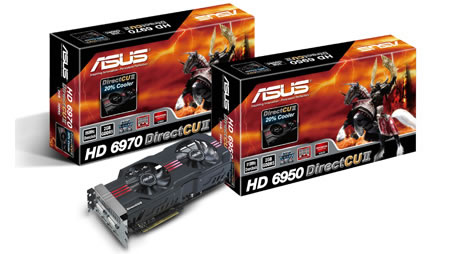