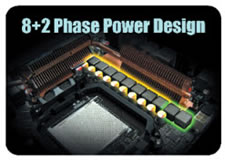 Asus has today launched the brand new M4 Series motherboards to fully support the AMD next generation AM3 processors. The Phenom II AM3 processors are able to support up to DDR 3 2000MHz memory speed, so DDR3 tech. is finally realized in AMD platform. To unleash the AM3 processors’ full potential, Asus’ constant development of the 8-Phase power design has resulted in superb performances—reaching an excellent 91% in power efficiency. With the Asus TurboV’s intuitive overclocking utility, and the easy-to-use Asus Turbo Key, users can easily overclock and overvoltage the new processors like never before. The Asus M4 Series thus brings the AM3 CPU performance into full play—providing users with the perfect choice for the AM3 processors usage.