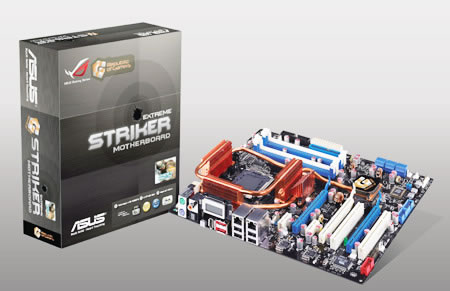 Asus today introduced the Striker Extreme motherboard, specifically designed to simplify the DIY process and add style to gaming systems. As the newest member of the popular Republic of Gamers (ROG) series, the Asus nForce 680i SLI-based Striker Extreme supports Intel Quad-Core Processor and Nvidia’s Quad-SLI technology, and is ready for the new 1,333MHz FSB specification. Made for gamers and tweakers, the Asus motherboard provides the power needed for smooth video and extreme performance. The LCD Poster, located at the back I/O, displays the names of each boot-process instead of using codes. When system hangs due to faulty connection or configuration, the LCD Poster will freeze on the displayed process name that caused the hang up, allowing users to know exactly what needs to be fixed. The Asus Striker Extreme incorporated EL I/O, which simplifies connecting devices by lighting up the back I/O panel for convenient connection in dark environments, meaning no more jamming devices into the wrong connectors. Onboard LED offers strategically placed LEDs to provide illumination to motherboard labels. Users can turn on the LEDs from a switch on the back I/O. This switch also cuts all other circuits on the motherboard except the LEDs to ensure safety during system tweaking. Besides allowing easy DIY, the two features also jazz up a system with cool lightings. 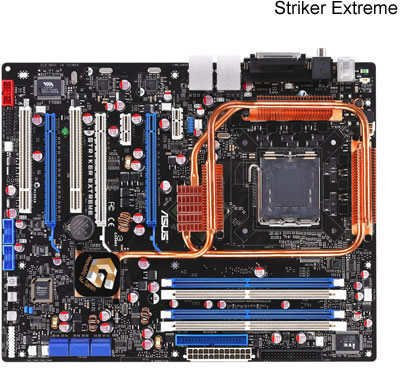 The SupremeFX audio card, with 24 bit/192kHz sampling in all surround channels, provides high-quality audio whether it’s through headphones or 7.1 surround sound speakers. The bundled array microphone, which comes with background noise filter that detects repetitive and stationary noises (non-voice signals) like computer fans and air conditioners, then eliminates them in the incoming audio stream while recording. The ATX Form Factor ASUS Striker Extreme Motherboard measures 30.5cm x 24.5cm.
Via asus