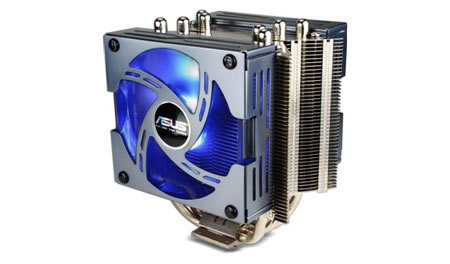 The new Asus Triton 81—the latest member of the Triton family of highly effective thermal solutions, is capable of supporting powerful Quad-Core processors as well as the latest Intel Core i7 processor (LGA 1366). Despite its powerful performance, the Asus Triton 81 is a relatively silent yet effective performance component—running at a mere 18 dBA with its built-in PWM function, which automatically adjusts fan speeds according to the CPU’s temperature for an optimal operating environment.

The Asus Triton 81 utilizes an exclusive 4-way airflow heatsink design to create an unobstructed passage of air circulation; and together with 4 U-shaped copper heatpipes for the most efficient heat transference, delivers ultimate cooling performance for a myriad of processor intensive applications and modifications. Equipped with a diamond-blue LED with dual 90mm fans, the Triton 81 provides an effective channel of airflow to the system, delivering vital thermal protection for stable operations