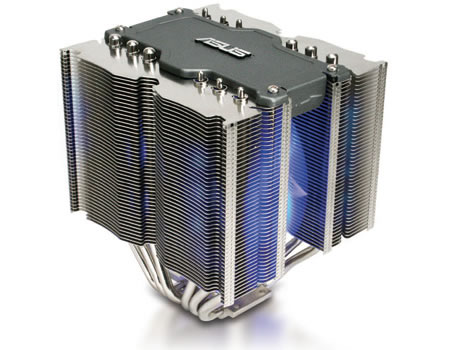 The exterior of the fierce-looking Asus Triton 88 CPU cooler comprises of an exclusive twin-pillared heatsink design, a 120mm inner-fan with a Diamond blue LED, and 6 copper heat pipes. With this ensemble of thermal features, Asus Triton 88 CPU Cooler is able to deliver ultimate cooling performances for up to 180W and can support multiple applications—including the latest Intel Core i7 processor (LGA1366). With the fan positioned within the heatsink, VRM can be protected against high temperatures with the guiding of cool air to critical components near the CPU—ensuring system stability.

To provide the best heat dissipation, the Asus Triton 88 is equipped with a massive heat dissipation area of up to 8000cm2; while 6 high conductive copper heatpipes and the 120mm LED fan provides maximum airflow and optimal cooling performance. The Triton 88 is equipped with a PWM function that is able to automatically adjust the fan speed according to the CPU’s temperature—providing low acoustics during operation.