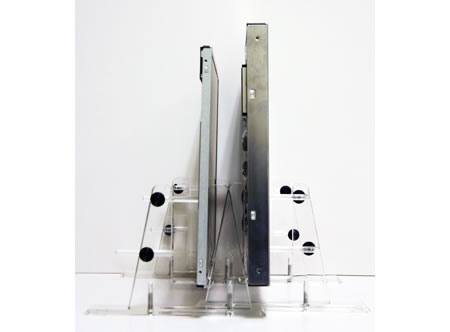 Compared with the conventional 24-inch monitor panel, AUO is able to reduce over 50% of the module thickness from 35 mm to 14 mm.
Press release after the jump

AUO optimized the optical performance and reduced the amount of CCFL backlights of this 24-inch monitor panel. As a result, the power consumption is reduced by up to 50%. With less than half of the energy, the brightness can be retained as 300 nits and contrast ratio reached 1000:1. Furthermore, taking the average 50,000 hours life of a typical LCD monitor for example, the new technology can save consumers 2,500 watts of power which are equal to 1.6 tons of carbon emission reduction.
AU Optronics Corp (AUO) of Taiwan developed a 14mm thick 24-inch LCD panel. Featuring full-HD resolution (1920 x 1080p) and the aspect ratio of 16:9, the panel is designed for multimedia monitors to watch TV broadcasts and package media.
Based on the mechanisms and optical technologies accumulated in the development of middle size LCD panels, the company reduced the thickness of the latest panel and the bezel width. The panel width was reduced to less than half that of the existing product with a thickness of 35mm. The company reportedly reduced the variation in luminance on the screen, which is often caused by the thickness reduction.
As a result of the optimization of optical design as well as the reduction in the number of CCFLs used in the backlight, the power consumption of the panel is reduced by approximately 50%, while maintaining the luminance and the contrast ratio of the existing product, 300cd/m2 and 1,000:1, according to the company. The life of the panel is about 50,000 hours, which is about average for panels used in LCD monitors.
AUO plans to launch the line of products with the aspect ratio of 16:9 targeting at multimedia monitors, which comes in 15-, 18.5-, 21.5-, 24-, 27- and 32-inch models. The company has already started to mass-produce 15-inch model and will launch the volume production of other models in the second quarter of 2008, with exception of the 27-inch model, which will be mass-produced from the fourth quarter of the same year.