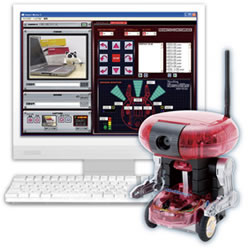 Bandai Co., Ltd. will shortly launch the “NetTansor,” a remote controllable home use robot using the Internet. The robot delivers video shot with its embedded camera via WLAN. Then the user operates the robot while watching the video on the PC screen. The robot can be used for many valuable purposes like- to monitor inside the house from outside, send a video clip email of what has passed in front of the NetTansor, or see what pets are doing at home etc.The NetTansor is Bandai’s existing “TansorBorg” programmable robot on the market added with a camera embedded networking unit.

With multiple sample programs provided, users can enjoy a variety of actions even if using only these sample programs. Bandai will exhibit the NetTansor at the “Akiba Robot Sports Fair 2006” event to be held from November 3 to 5, 2006. Bandai Company will start booking for NetTansor from December 16, 2006. NetTansor will be available for approximately 50,000 Yen ($422).
Via TechOn