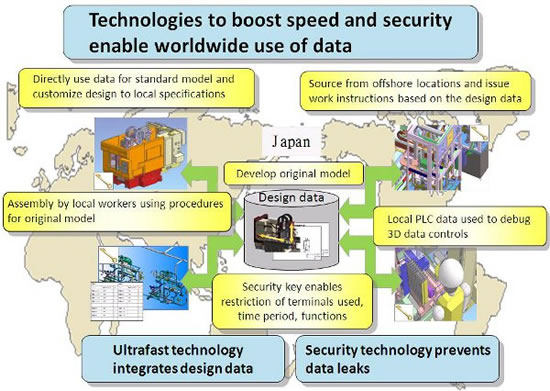 Fujitsu today announced the immediate release of iCAD V7L2, the latest version of iCAD V7, the company’s 3D CAD software for machinery design, with the world’s fastest CAD engine. Fujitsu iCAD V7L2 cuts both the amount of data that it works with and required memory to roughly double the processing performance of the 3D CAD engine. This accelerates operational speed on a wide variety of design studies and verifications, even on massive datasets representing tens of thousands or hundreds of thousands of parts, and enables integration of a massive amount of design data. It also includes newly developed security technology to prevent the copying or output of data, reducing the risk of leaks when transnational design teams collaborate. This means that design data that had previously been sent only on paper or verbally or intentionally not sent at all out of security concerns, can now be shared securely.

Fujitsu iCAD V7L2 will be exhibited at Fujitsu Forum 2012, running May 17–18 at Tokyo International Forum (in Chiyoda-ku, Tokyo). It will also be exhibited at iCAD Forum 21st, which will be held May 13 in Tokyo, May 31 in Aichi, and June 6 in Osaka; and at the 23rd Design Engineering & Manufacturing Solutions Expo, running June 20–22 at Tokyo Big Sight.