Fujitsu today announced the release of the new DoCoMo ARROWS Tab F-05E Tablet, which will be available from NTT DOCOMO. retail locations in Japan starting December 8. As a flagship model of Fujitsu’s tablet lineup, the F-05E is packed with high-spec features for entertainment, including Dolby Digital Plus technology for immersive sound, a switch-enabled smart fingerprint sensor, and a family-friendly style switcher. The hairline finish on the back and other carefully designed touches give the tablet a quality feel. The 9.9mm thickness of the ARROWS Tab F-05E makes it a highly portable device. 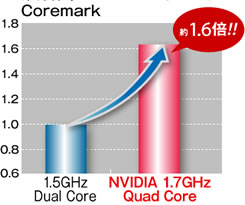 The new tablet is equipped with an NVIDIA Tegra 3 quad-core processor for outstanding performance. With a high performance 1.7 GHz CPU and a 12-core graphics processing unit, high-definition games that depend heavily on graphic processing power still run smoothly. The quad-core processor actually has what is known as a 4-plus-1 architecture: it has a fifth low-power core built in, so that it can run in power-saving mode for less process heavy operations. 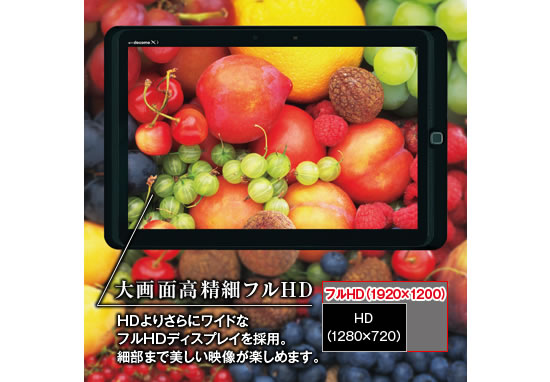 The Arrows Tab F-05E tablet wirelessly connects to DLNA-compatible Blu-Ray players and other devices to stream recorded terrestrial digital broadcasts throughout the home. It can also wirelessly make copies of recorded programs to be played back on the tablet when away from home, and it supports the new SKY Perfect TV! premium service’s high-definition programming. 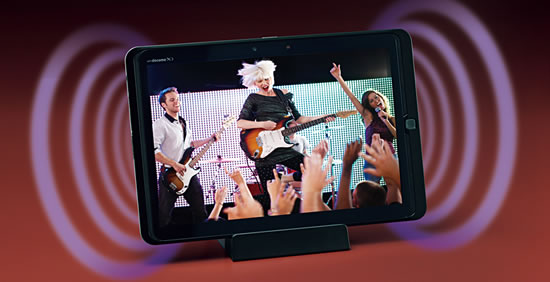 The Arrows Tab F-05E tablet is the first tablet in Japan to come equipped with the next generation of Dolby Digital Plus. Using only the front-facing speakers, YouTube videos come alive with a dimensional surround sound that provides the user with a home theater experience.

Fujitsu’s Human-Centric Engine which uses cutting-edge sensor technology to provide an ideal user experience is even more sophisticated than before. To compensate for the decline in color sensitivity that occurs as people age, the new Matching View feature customizes the screen’s color balance to the user’s age, while Clear Touch makes touch-based operations more obvious.

READ  Fujitsu Develops Technology that Speeds up in-database, large-scale analyses by a factor of approx. 400

The 8.1-megapixel camera with an Exmore RS for mobile CMOS image sensor is the perfect complement to the tablet’s high-definition screen. And with a 10.1″ screen, everyone can enjoy photos and videos shot using the tablet. This slim tablet packs in numerous thoughtful touches, including the Fujitsu Mobile Integrated Dictionary+, which includes 30 full-length dictionaries, the ATOK advanced Japanese-language input method, IPX5/8 water resistance, IPX5 dust resistance, 1-seg broadcast television, NOTTV, and Bluetooth 4.0.