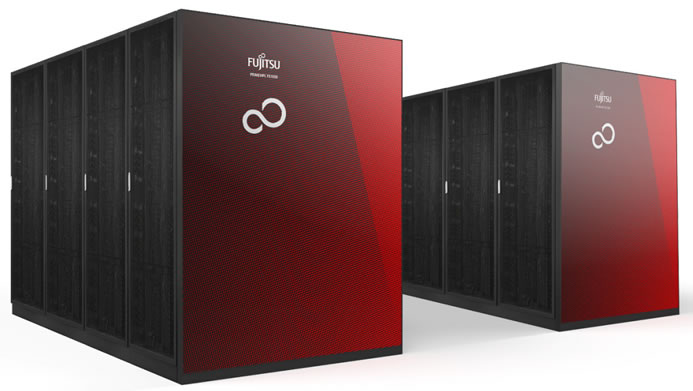 Fujitsu today announced that it will begin global sales of the PRIMEHPC FX1000 and PRIMEHPC FX700 models from the Fujitsu Supercomputer PRIMEHPC series. The new PRIMEHPC Supercomputers utilize the technology of supercomputer Fugaku jointly developed by RIKEN and Fujitsu. Both Supercomputers are equipped with the world’s first CPU A64FX adopting Scalable Vector Extension (SVE) which is an extension of the Arm v8-A architecture for supercomputers. The 2 new models achieve high performance-per-watt.

Moreover, the A64FX developed by inheriting the high-performance, low-power CPU design that Fujitsu has developed so far, provides high performance per watt. The CPU not only achieves a high memory bandwidth by using HBM2 a high-performance die-stacked memory, but also can handle half-precision arithmetic and multiply-add, which are important in such technologies as deep learning. With support for the same Tofu interconnect D as Fugaku for maximum scalability in large configurations, and ultra-dense implementation of up to 384 nodes per rack, FX1000 can efficiently build large systems that deliver theoretical computing performance in excess of 1.3 exaflops. Global shipment is scheduled for March 2020.