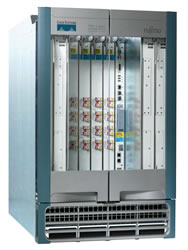 Fujitsu Limited and Cisco Systems, Inc. today announced that they have launched sales in Japan of a four-slot model of the co-branded “Fujitsu and Cisco CRS-1” Carrier Routing System. The new router model delivers the same 40 gigabits-per-second (Gbps) of switching capacity per slot as other models in the series, providing a total switching capacity of 320 Gbps in the world’s most compact 40 Gbps-per-slot chassis. This high capacity and compact footprint enables the new model to be used with a wide range of equipment installations, making it easy to be deployed by regional telecommunications carriers and ISPs who are seeking to construct backbone networks with high speed, capacity, and reliability. In addition, leading telecommunications carriers can use the new model in their backbone networks as a layer 3 aggregation router in combination with existing high-end Fujitsu and Cisco CRS-1 series to enable enhanced flexibility in traffic control.

The new four-slot model utilizes the same I/O modules and forwarding engines as existing 8-slot and 16-slot models so that existing hardware assets can continue to be used, enabling ongoing investment protection. The Fujitsu and Cisco CRS-1 series run on the Cisco IOS XR operating system.