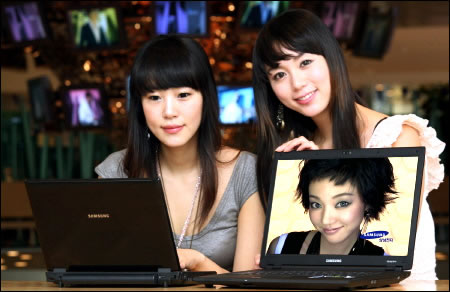 Samsung Electronics, LG Electronics, Dell and many others announced the launching of new laptop lineups simultaneously on Wednesday with the official debut of Intel’s new Santa Rosa platform, which is optimized for faster and long-lasting wireless Internet use. In addition to the improved wireless communication capability, Santa Rosa laptops provide enhanced battery life and faster 3-dimensional graphic processing, the company said. In a demonstration of the “Lineage 2” game, Santa Rosa laptops showed up to a 30-percent improvement in showing fast-changing 3-D graphics, meaning they are now matching the processing power of bulky desktop PCs. The Santa Rosa system also introduced a human factor into electronic computing, though it’s still at an early stage, as an equivalent of human’s learning curve effect _ as one gets more experienced at a task, it becomes more efficient in doing it. The technology uses a small flash memory chip to cache frequently-used files. As a result, the more a program is used, the faster it is supposed to be executed as it brings in the data from a memory cache, not the hard disk drive.

Intel currently occupies about 80 percent of the main computer processor (CPU) market worldwide, far ahead of runner-up AMD. The California-headquartered company likes to name its projects after neighboring towns such as Napa, Sonoma and Santa Rosa. Santa Rosa is the moniker for the fourth generation of the Intel Centrino platform. It is a package of hardware and software systems including Centrino CPU and Intel Turbo Memory.