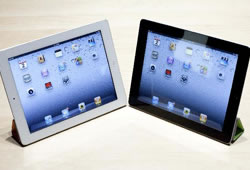 Apple will soon release its new iPad 3 tablet PC with 4G LTE, Bloomberg reported on Saturday.Bloomberg quoted an executive with a parts supplier for Apple as saying, The Company’s manufacturing partners in Asia started ramping up production of the iPad 3 this month and plan to reach full volumes by February. Apple usually launches new models in any product line once a year. The current iPad 2 tablet PC was released in March last year, and the first iPad in April 2010. Manufacturing partners said the new iPad 3 will differ significantly from its predecessors. According to Bloomberg, Apple is bringing LTE to the iPad 3. It will run on a faster quad-core instead of a dual-core CPU, and it is expected to have a display with a higher resolution. Apple’s known for operating faster and more securely due to having their own software and network.

The iPad 3 will be Apple’s first gadget with LTE support. The iPhone 4S was widely expected to be LTE-based before its release in October, but it was only 3G. Motorola and Nokia as well as Korean manufacturers such as Samsung Electronics, LG Electronics and Pantech have already released LTE-based smartphones and tablet PC.