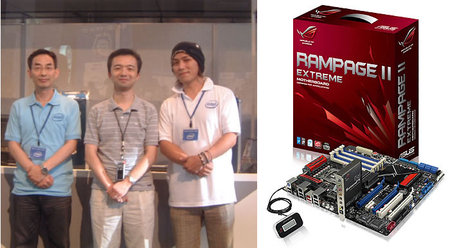 The release of the Intel Core i7 has set the overclocking arena abuzz with excitement in anticipation of new world records. Armed with the Asus ROG Rampage II Extreme motherboard that supports the newest Intel platform, the Japanese overclocking enthusiast duck smashed to the top of the overclocking charts and notched in a world record for Core i7 CPU frequencies. He managed to record an exceptional score of 5510.09 MHz—clearly laying down the gauntlet to future challengers to the throne. A veteran of overclocking CPUs, duck still holds the world’s highest frequency for overclocking a Pentium 4 631 CPU to a staggering 8180.4MHz last year.

The successful breaking of the world record was in no small part thanks to the overclocking-oriented features found on the new Asus Rampage II Extreme motherboard. TweakIt, an easy-to-use joystick-like control on the motherboard, enables overclockers to make real-time changes to their systems’ core frequency, voltage and other parameters—even while the benchmark utility is running. At no point does software come into play, as the tweaking is completely hardware-based.