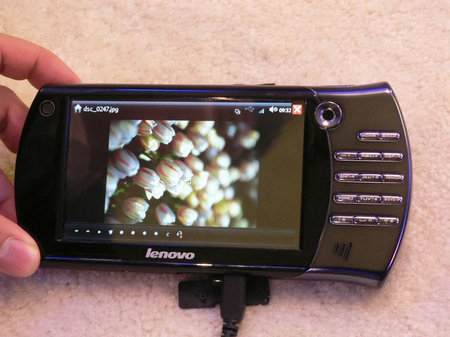 Lenovo revealed an ultra small prototype PC, which weighs only 300g, at the 2008 International CES. The PC employed “Menlow,” a new platform that Intel Corp is planning to launch in 2008. The PC uses Linux as its OS. It targets startup time of 20 seconds. Easy menu icons by purpose, such as internet ,entertainment, and Home,are displayed on the startup screen. Major specifications of Lenovo’s prototype PC are as follows. It is equipped with 45nm process “Silverthorne (development code name)” microprocessor, a 4- or 8-Gbyte SSD and a 4.8-inch 800 x 480 resolution LCD display. A wireless LAN, Bluetooth and EDGE or TDS-CDMA are supported. Continuous operation of the embedded secondary battery extends to 4 hours when browsing Websites.

Lenovo will release the PC in China in mid 2008. Pricing will be about 75,000 yen ($685) including tax. Lenovo plans to expand the market for this PC to other countries excluding Japan in 2009.