LG announced today three new tablets to its G Pad series to offer more options for tablet users. The latest G Pad tablets- G Pad 7.0, G Pad 8.0 and G Pad 10.1, will include LG’s proprietary UX features such as QPair 2.0 and Knock Code. With an updated version of QPair, which was first introduced on G Pad 8.3, users can effortlessly connect to their Android-powered smartphones via Bluetooth to receive notifications of calls and messages and now be able to respond directly from the G Pad. Highlights of LG’s new G Pad Series tablets are: G Pad 7.0: Designed to be held in one hand, LG’s smallest tablet is an on-the-go entertainment hub that delivers both portability and power. 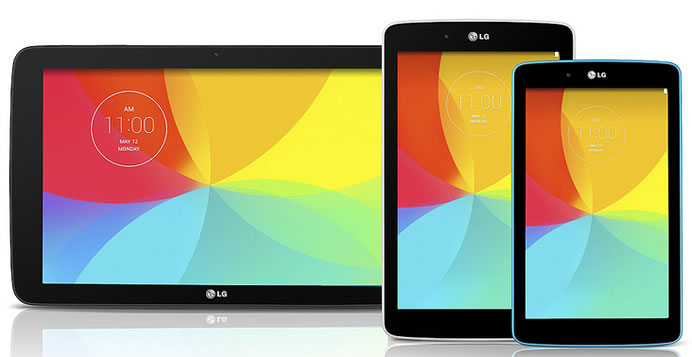 G Pad 8.0: With its 8-inch display, LG’s mid-sized tablet offers an immersive multimedia experience and smooth multitasking. G Pad 10.1: With the largest display and battery, LG’s 10.1-inch tablet provides endless hours of entertainment and fun. Knock Code offers convenience and greater security as the knock pattern can be entered anywhere on the screen in any size ― with the display on or off ― using a personalized sequence of two to eight taps for more than 80,000 possible combination. The new G Pad devices ― G Pad 7.0, G Pad 8.0 and G Pad 10.1 ― will be unveiled at the MedPI 2014, one of the biggest IT/Tech trade show in Europe, taking place in Monaco from May 13-16.