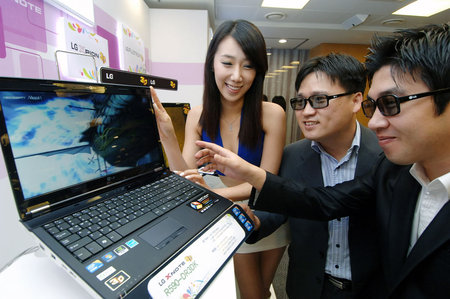 LG today announced the launch of its first 3D notebook- LG R590 3D which captures all the benefits of 3D in a portable form factor. To create the optimal 3D viewing experience without the need for buffering, the LG R590 3D with 15.6-inch display is powered by an Intel Core i7 Processor with HM55 chipset and NVIDIA GeForce GT335M graphics card, including 1GB of dedicated DDR3 video memory. The new LG 3D notebook features SRS Tru-Surround HD for an even more thrilling 3D entertainment experience, while an optional Blu-ray drive allows for the viewing of HD movies in both 2D and 3D. In addition, included TriDef software converts 2D video to 3D in real time so there’s never a dearth of 3D content for the LG R590 3D.

Included polarized glasses help reduce eye fatigue when watching 3D content on the LG R590 3D. With no internal circuitry or batteries, the slim, lightweight glasses are easy and convenient to carry with laptops. LG’s first 3D notebook will be launched in Korea this month and introduced globally in the weeks to follow.