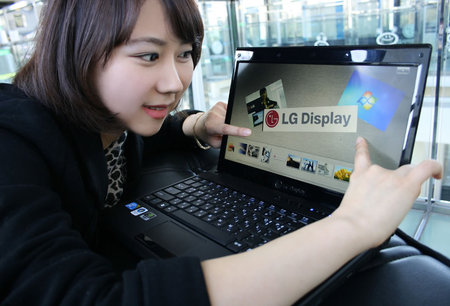 LG Display has obtained Microsoft’s Windows 7 Touch Logo certification for its touch screen panels. The certified product is a 13.3-inch Capacitive In-Cell Multi-Touch LCD Panel for notebook PCs with multi-touch functions that enable simultaneous recognition of two touch points. Unlike the conventional touch screen products where generally films for touch screen function are applied to the standard display, the product has touch sensors built into the display. The panel is appropriate for notebook PCs that are frequently used outdoors, as it prevents light reflection and brightness declines that films generally cause.

Windows 7 Touch Logo certification is a program at Microsoft that validates the quality of multi-touch digitizers for use with Windows 7 and the panel’s compatibility. LG Display became the world’s first to achieve the Windows 7 Touch Logo Certification with in-cell touch panels. Fully internalized within the display, the in-cell touch sensor has many benefits over the films additionally attached to the products. It preserves picture quality and maintains the display’s original thickness. LG Display plans to launch mass production of the panel in the second half of 2010.