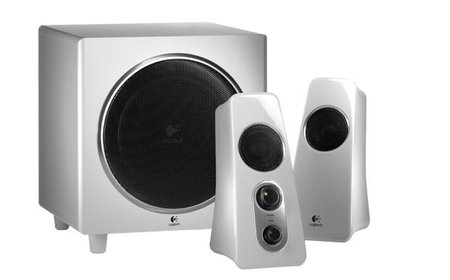 You can transport yourself into your music, movies and games with the Logitech Speaker System Z523. The Z523 speaker system includes two sleek satellites and a 6.5-inch down-firing subwoofer, which delivers deep lows for rich bass you can feel. With 40 watts (RMS) of power, the Z523 system can fill your room with bold, dynamic sound.The Logitech Z523 system offers convenient on-speaker controls so you can quickly turn down the volume.

The Logitech Z523 multimedia speaker include an integrated dual RCA jack and a 3.5 mm jack so you can connect headphones, Logitech Squeezebox network music player, a gaming console, DVD player or iPod with ease. The Logitech Speaker System Z523 is available in the U.S. and Europe for a suggested retail price of $99.99 (U.S.).