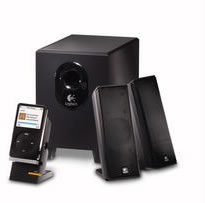 Logitech today announced the Logitech X-240 speaker system for the PC, to be on display at the 2007 Consumer Electronics Show next week. The X-240 PC speaker system features a redesigned control center that includes audio controls for a PC or Mac and serves as a cradle for an iPod or other MP3 player, PDA or mobile phone. With plug-and-play functionality, the Logitech X-240 speaker system allows people to dock their digital device by simply plugging it into the cradle. When their device of choice is docked, people can charge it and sync or play their favorite digital music. And when not in use, the cradle can be stored flush with the control pod. The X-240 speakers include specialized trays for the iPod and Microsoft Zune. In addition to providing a custom fit, these trays help route the iPod or Zune charging cables behind the control pod and out of sight. With stylish metal grilles, high-excursion satellite drivers, a ported down-firing subwoofer and dynamic, real-time bass equalization, the speakers deliver great audio in a stylish and slim design.

For easy access, the control center also features master volume control, power buttons, and a convenient headphone jack that enables private listening. The Logitech X-240 speaker system is expected to be available in the U.S. beginning in April and in Europe beginning in May with a suggested retail price in the U.S. of $49.99.