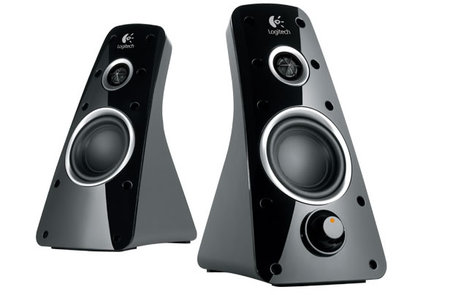 The new Logitech multimedia speaker systems Z520 and Z320 feature 360-Degree Sound, or omnidirectional acoustics, which creates a substantially wider sweet spot – an especially helpful feature if you often move your computer around your home or office. The Logitech Speaker System Z520 brings your music, movies and games to life thanks to an amplified two-way design and 26 watts (RMS) of power. The Z520 speakers are loud enough for a small party and detailed enough for subtle tones. Ideal for laptops, the Logitech Speaker System Z320 can be plugged in wherever you work – and fill your office, or cubicle, with 10 watts (RMS) of sound.

When you want to enjoy tunes from your iPod or listen to your headphones privately, simply plug them into the auxiliary jack – you won’t even need to unplug the Z520 or Z320 speaker systems. Whether you’re working or rocking out, Logitech’s new stereo multimedia speakers – the Logitech Speaker System Z520 and the Logitech Speaker System Z320 – are stylish and can fill a room with sound when you don’t want to make space for a subwoofer.