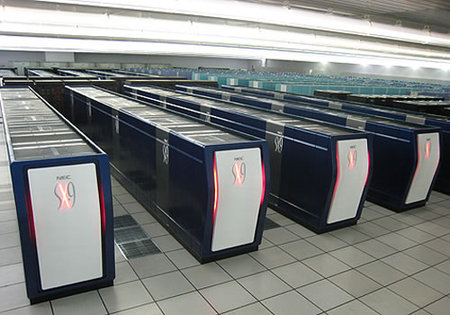 NEC announced that the renewed Earth Simulator System which NEC deployed for the Japan Agency for Marine-Earth Science and Technology on March 1, 2009, achieved sustained performance of 122.4 TFLOPS and computing efficiency of 93.38% on the LINPACK Benchmark. The renewed Earth Simulator System is a large-scale vector supercomputer that consists of 160 nodes of NEC’s SX-9/E and boasts peak performance of 131 TFLOPS. This vector supercomputer is equipped with a high performance CPU (102.4 GFLOPS), which is ranked the world’s fastest CPU currently operating. The system’s scores were achieved through large-scale shared memory, high speed data transfer between the CPU and memory, and an ultra high speed network connecting nodes, in addition to the CPU’s performance.

The performance of the renewed Earth Simulator System enables greater accuracy and understanding in the provision of advanced warnings for complex phenomenon that include global warming, air and ocean pollution, the El Nino effect, severe rainfall, hurricane movement forecasts and others. The system is also expected to contribute to greater Japanese economic activity, the resolution of environmental issues and the understanding of changes in the Earth’s crust and earthquake occurrences