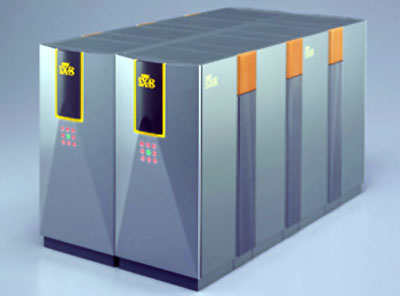 NEC Corporation today announced the worldwide launch and availability of a new supercomputer in the SX series, model SX-8R (an enhanced version of SX-8), the world’s most powerful vector supercomputer with a peak vector performance of 144 TFLOPS (TFLOPS: one trillion floating point operations per second).The new supercomputer contains twice as many pipelines for addition and multiplication as the SX-8 in its vector unit, the central function of a vector processor. In addition, with 10% faster clock cycles, it realizes more than double the performance of the SX-8 at 35.2GFLOPS (GFLOPS: one billion floating point operations per second). As a total system,, it achieves the world’s fastest speed among vector supercomputers at 144TFLOPS by mounting up to 4,096 CPUs.

The monthly rental price of the SX-8R will start from approximately 1,210,000 yen ($10,179). NEC expects 200 system sales over the next year. NEC has already begun development of its next vector supercomputer, focusing on that of a single-chip vector processor whose performance per CPU exceeds 100GFLOPS.