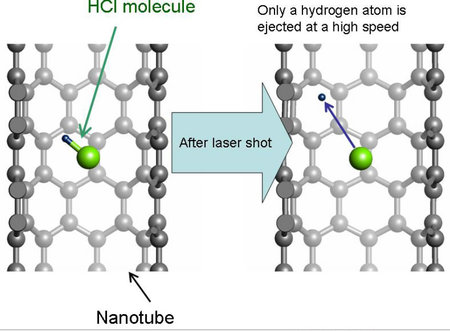 NEC announced today that it succeeded in the world’s first simulation-based prediction of laser-induced photochemical reactions that can efficiently eject a hydrogen atom from a hydrogen chloride molecule trapped inside a carbon nanotube. The simulation was conducted on the Earth Simulator which NEC deployed for the Japan Agency for Marine-Earth Science and Technology. These results are expected to pave the way for the quantity synthesis of not only hydrogen, but also inexpensive materials through the facilitation of known photochemical reactions due to the laser pulse irradiation, as well as the development of new materials.