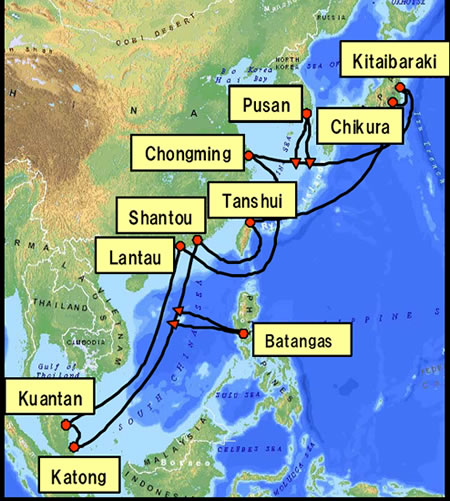 NEC announced today the signing of a multi-million-dollar contract with a purchasing consortium of 14 major telecom operators in the Asia Pacific region for the world’s first 40Gb/s dense wavelength division multiplexing (DWDM) capacity upgrade to an existing large scale submarine cable network. The existing APCN2 (Asia Pacific Cable Network 2), with over 19,000km of cable that connects 10 landing stations in the Asia Pacific region, was originally supplied by NEC in 2001 with a 10Gb/s DWDM system design.

In response to the rising transmission demands in the region, NEC proposed its state-of-the-art 40Gb/s DWDM technology as a dramatic enhancement and expansion to the capacity of the existing 10Gb/s submarine cable network. NEC estimates that by adding 40Gb/s wavelengths the cable’s capacity can be enlarged by as much as 4 times its original ultimate design capacity of 2.56Tb/s. The upgrade is scheduled to be completed by 2Q of 2011.