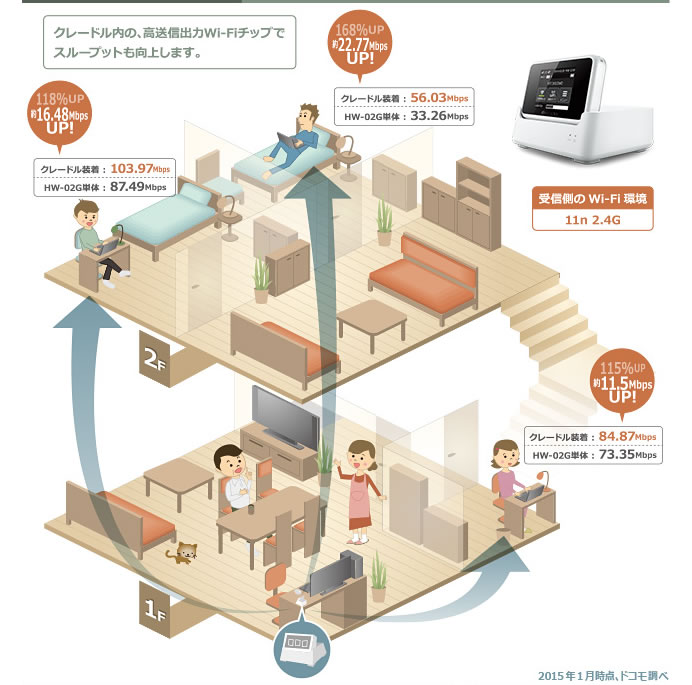 NTT DoCoMo announced today that it will launch its LTE-Advanced next-generation mobile communication service featuring a Japan-best 225Mbps maximum data-transmission speed on March 27. A unique feature of DoCoMo ‘s LTE-Advanced service will be its introduction of Advanced C-RAN, a network architecture that efficiently increases radio capacity and maximum transmission speed simultaneously especially in high-traffic areas. The DoCoMo LTE-Advanced network will launch initially in 22 prefectures, including Tokyo, Nagoya and Osaka. Nationwide availability is expected by March 2016.

The use of carrier aggregation technology will enable DoCoMo ‘s LTE-Advanced to achieve its ultra-high speed downlink, which will be further accelerated to a maximum 300Mbps towards the end of the next fiscal year ending in March 2016. The maximum uplink will be 50Mbps. Two DoCoMo mobile Wi-Fi routers will be available for the service—the Wi-Fi STATION HW-02G, which is now on the market, and the L-01G, which is scheduled to launch in March. DoCoMo is also preparing to expand its lineup of compatible smartphones soon.