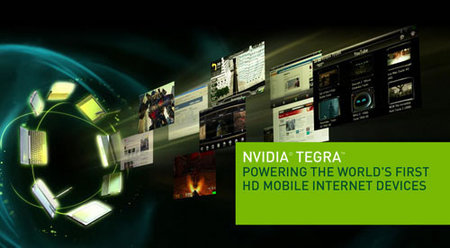 Nvidia today unveiled 12 new high-definition mobile Internet devices (MIDs) all powered by the Nvidia Tegra processor, the world’s smallest and lowest power computer-on-a-chip. These new Tegra-based devices, which include netbooks and tablets, deliver desktop-class Internet browsing with Flash video and animation acceleration, and up to 1080p video playback. Nvidia Tegra processors feature always-on operation for instant access to the Internet, which compares to that of cell phone-class power management, and up to 5x the battery life of current netbooks—making days of HD mobile Internet experiences a reality. Tegra-based MIDs deliver all-day media processing, including: Listening to music for 25 days straight on one charge, Watching 1080p HD video for up to 10 hours and Playing video games at 46 frames per second.

The Nvidia Tegra processor is a heterogeneous multiprocessor architecture. Each processor unit is architected for a specific class of tasks—a CPU for running html and Java, an HD video processor that makes streaming HD video playback possible on a netbook for the first time, and an ultra-low power Nvidia GPU for a compelling user interface and for Flash acceleration. These processors are used together or independently to deliver a wonderful experience while utilizing minimal power.