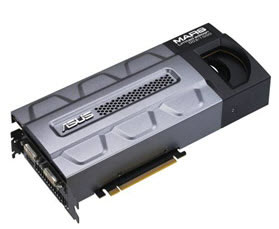 Harnessing exclusive ROG features to unleash the power of Nvidia GeForce GPUs, the Asus ROG MARS is currently the fastest graphics card in the world. Dual Nvidia GeForce GTX 285 GPUs, an awe-inspiring 4GB of onboard memory and the world’s first 1024-bit memory bandwidth work seamlessly with cutting-edge technologies from Nvidia such as Quad SL and PhysX to deliver astronomical graphics. The Asus ROG MARS yields an astounding 23% improvement in terms of single card performance when compared to reference designed boards, setting eye-popping 3DMark Vantage Extreme, High and Performance Preset scores of X25949, H34711 and P40824 respectively with Quad SLI—cementing the perfect partnership between Asus and Nvidia. The FPS (Frames Per Second) of the ASUS ROG MARS is 28 versus the 16 of a reference design board when running Crysis Warhead at 2560×1600 Very High Resolution.

The Asus ROG MARS increases its performance by 75% to allow users to fully enjoy games without lag or stuttering—even at the highest resolutions and maximum quality settings. The Asus ROG MARS features an improved thermal design that increases heatpipe coverage by 65%—as well as the heat dissipation rate by 20%—to ensure cooling even during graphically intensive operations. The ROG MARS will only be available as a limited edition. Just 1,000 units will be produced, with each graphics card assigned a unique serial number—making the Asus ROG MARS a true masterpiece of power and performance.