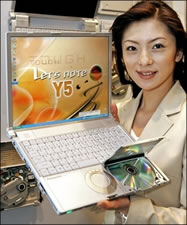 Japanese electronics giant Matsushita, the maker of Panasonic products, has begun recalling some 6,000 laptop batteries due to fears that they may overheat, a company spokesman has said. Matsushita Electric Industrial is recalling lithium-ion batteries installed in Panasonic-brand notebook computers assembled in April and May last year and sold in the Japanese market. A company spokesman said the batteries are not products of either Sony or Matsushita, but declined to name the manufacturer. Last month Dell announced a recall of an estimated 4.1 million laptop batteries made by Sony fearing Sony-made batteries could burst into flames. Apple also recalled an estimated 1.1 million Sony-made laptop batteries in the United States and 700,000 more in other countries.

Matsushita spokesman Akira Kadota said the batteries in the Panasonic-brand notebook computers may overheat but they would not start a fire. He also said that
Matsushita received two reports in January and May that batteries installed in its laptops had overheated and deformed the plastic exterior but no one was injured.