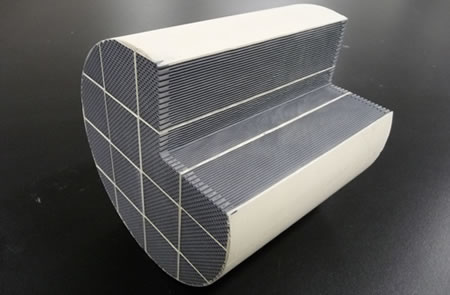 Panasonic has succeeded in the development of a new catalyst using an alkali metal compound to decompose and purify particulate matter in diesel engine exhaust gas. This new alkali metal-based catalyst developed by Panasonic Ecology Systems, accelerates the oxidation of particulate matter and directly decomposes them without using platinum. It provides the same level of combustion performance as a conventional platinum-based catalyst but at a lower temperature (approximately 20% lower, in-house experiment). This means less energy is required to maintain the optimum temperature for catalytic reactions, thereby reducing CO2 emissions and contributing to energy conservation. When used at the same temperature required for the conventional platinum-based catalyst, this new catalyst even increases the combustion speed.

In addition to using a new metal compound in the catalyst, Panasonic has devised a new catalyst coating technology to maximize the performance of the catalyst on a variety of DPF types. A new additive was also developed to solve the durability issue associated with a catalyst using alkali metal, making this new technology possible. Panasonic currently has 84 patents in Japan and 7 patents overseas, including pending applications.