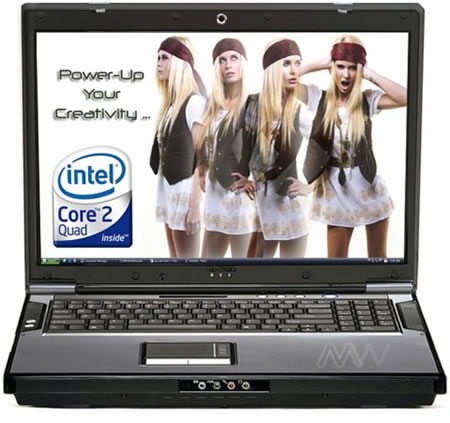 PC MicroWorks today announced the release of its most powerful portable workstation to date, the Black-Hawk XR5 Quad Core Super Notebook. The new XR5 is the first portable worldwide announced with the ability to house two of NVIDIA’s flagship mobile PCI express graphics units – the brand new Geforce Go 8800GTX cards in SLI mode.The PC MicroWorks new Black-Hawk utilizes the breakthrough Intel quad core architecture previously available only in desktops and allows for more efficient multitasking, quicker encoding/rendering times, and faster overall system performance on the go. In addition to the quad CPU and dual video cards, the XR5 can house up to 3 SATA 300 hard drives in a RAID array and 4GB of 800 MHz DDR2 system memory. The XR5 is more scalable than traditional notebooks in that it has the ability to upgrade the standardized PCI express graphics card(s), CPU, RAM, Hard Drives, and more as faster technology is made available. The product life cycle of these open architecture notebooks is generally extended far beyond that of traditional notebooks more commonly found on the market.

The new PC MicroWorks XR5 notebook will feature a custom carbon fiber top accented by piano black gloss finishes across the notebook to enhance the appearance and add to the exclusivity of the unit. PC MicroWorks XR5 will be the most powerful consumer notebook for the 2007 holiday season, and will begin shipping in December with pre-orders being taken now.