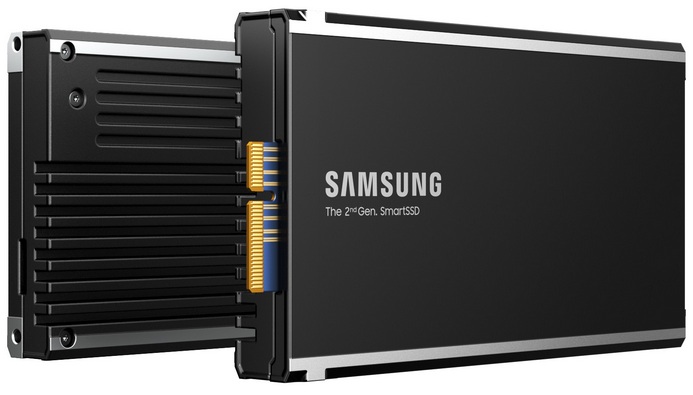 Samsung today announced that it has successfully developed a second generation of its pioneering SmartSSD. The new proprietary computational storage incorporates data processing functionality within a high-performance SSD. Unlike existing SSDs, Samsung’s SmartSSD can process data directly, thereby minimizing data transfers between the CPU, GPU and RAM. This technology can avoid the bottlenecks that often occur when moving data between storage devices and CPUs, resulting in markedly improved system performance and much higher energy efficiency.

Leveraging software and intellectual property (IP) developed by customers, along with in-built Arm cores, Samsung’s second-generation SmartSSD enables much more efficient data processing. Compared to conventional data center solid-state drives, processing time for scan-heavy database queries can be slashed by over 50%, energy consumption by up to 70% and CPU utilization by up to 97%.

Since its development in 2020 through the joint efforts of Samsung and AMD, the first-generation SmartSSD is being supplied to global IT companies including video communications platform providers. The first-generation SmartSSD was recognized as an Innovation Awards Honoree at CES 2021 for its outstanding performance and energy efficiency. Samsung is leading efforts to standardize SmartSSD technology through close collaboration with the Storage Networking Industry Association (SNIA) and with NVM Express, while seeking to expand the boundaries of SmartSSD devices through technological validation for a wide variety of applications.