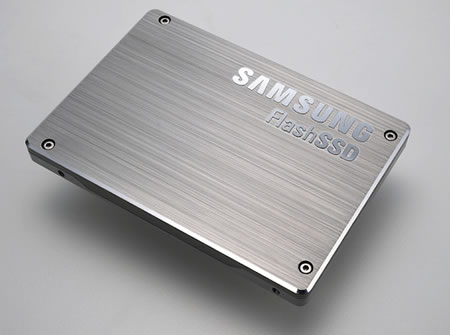 Samsung’s 64 GB solid state drive (SSD), with a high-performance SATA II interface, will be offered this month by Lenovo as the storage drive in its most sophisticated ThinkPad X300 notebook for the business traveler. Measuring less than three-quarters of an inch thick, approximately the height of a U.S. 25-cent coin, the ThinkPad X300 notebook aims to set the standard for thin and light, full-function notebook PC design. The Samsung SATA II SSD reads data at 100 megabytes per second (MB/s) and writes it at 80 MB/s. The drive operates up to 60 percent faster than SATA I drives and two to five times faster than conventional hard disk drives (HDDs). It also consumes approximately 30 percent less power than a typical HDD and weighs only 73 grams. The Samsung SATA II SSD can resist up to 1500 Gs of shock in a half millisecond.

The ThinkPad X300 notebook, with a starting weight of 2.9 pounds, can be configured for extreme portability with a 13-inch widescreen, GPS functionality and enterprise-level security features, as well as a wide range of wireless connectivity options.