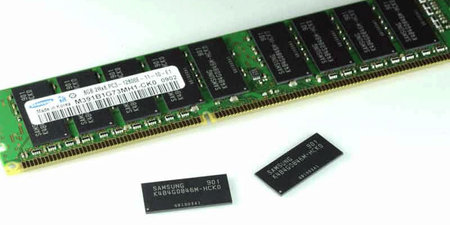 Samsung announced today that it has made a significant advancement in the push for higher volume memory chips by developing the world’s first four gigabit (Gb) DDR3 DRAM chip, using 50 nanometer (nm) process technology. The 4Gb DDR3 can be produced in 16 gigabyte (GB) registered dual in-line memory modules (RDIMM) for servers, as well as 8GB unbuffered DIMM (UDIMM) for workstations and desktop PCs, and 8GB small outline DIMM (SODIMM) for laptops. By applying dual-die package technology, this new device can deliver modules of up to 32GB – offering twice as much capacity as memory modules based on the previous highest chip density of 2Gb. Designed to be low-powered, the 4Gb DDR3 DRAM operates at 1.35 volts (V), therein improving its throughput by 20 percent over a 1.5V DDR3. Its maximum speed is 1.6 gigabits per second (Gbps).

In 16GB module configurations, 4Gb DDR3 can consume 40 percent less power than 2Gb DDR3 because of its higher density and because it uses only half the DRAM (32 vs. 64 chips). With an aggressive conversion to 50nm-class production for higher density DDR3, Samsung intends to remain the clear leader in high-volume/high-performance DRAM.