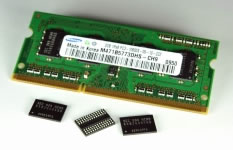 The Samsung 30nm-class 2Gb, Green DRAM reduces power consumption by up to 30 percent over 50nm-class DRAM. A 4-Gigabyte (GB), 30nm module when used in a new-generation notebook will consume only three watts per hour, which is just three percent of the total power usage of a notebook. The 30nm-class DDR3 is scheduled for mass production in the second half of this year.