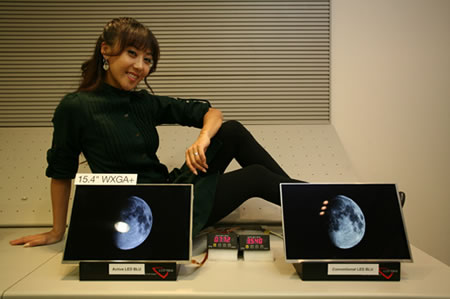 Samsung announced today that it has developed three new LCDs for notebook PCs – two offering a true 16:9 widescreen aspect ratio for viewing movies, TV shows and new-age gaming, while the third featuring active White-LED (light-emitting diode) backlighting that boosts picture clarity and reduces power consumption. The new 16:9 aspect-ratio displays – 16-inch and 18.4-inch – delivers virtually the same rich colors as that of an LCD TV with color saturation levels of 60 percent for the 16-inch model and 90 percent for the 18.4-inch model, compared to the 40-50 percent range seen in most notebook monitors today. Both Samsung 16:9 LCDs also feature an 800:1 contrast ratio, 8ms (millisecond) response time and 262,144 colors. In addition to its 16:9 aspect ratio notebook displays, Samsung has completed development of a 15.4-inch LCD with an active, White-LED backlight. The new 15.4-inch display operates on 40 percent less power than a typical LED backlight. LCDs with an active LED backlight unit provide a resolution of 1,440 x 900 and a brightness level of 300 nits.

Samsung will unveil its latest LCD models, which it expects will garner considerable interest in the high-end notebook PC market, at FPD International being held in Yokohama, Japan, October 24-26. Mass production is scheduled to commence in the first half of next year for the 16:9 displays and in the second half of 2008 for the White-LED backlit panel.