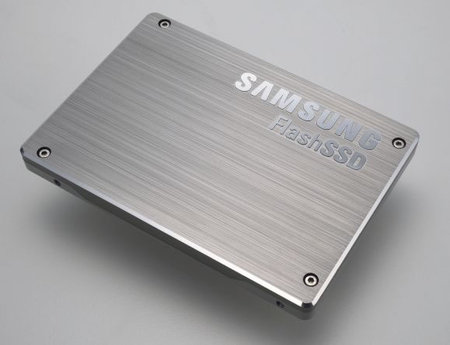 Samsung has begun mass production of 64 GB solid state drives (SSDs) with its new SATA II interface, offering the highest performance rates in the industry for premium notebook PCs. Able to read data at 100 megabytes per second and write it at 80 megabytes per second, Samsung’s SATA II SSD is up to 60 percent faster than SATA I drives and performs two to five times faster than conventional hard disk drives (HDDs). It also consumes nearly 75 percent less power than typical HDDs (1.45 watts compared to 2.1 watts) and at 73 grams, SSDs are much lighter than HDDs.
.

The new Samsung SATA II SSD can resist up to 1500 Gs of shock in a half millisecond compared to a shock resistance rating of 300 Gs in 2 milliseconds for a typical HDD. Samsung 64 GB SATA II SSD will be available as an option within the coming weeks in select Dell and Alienware notebooks.