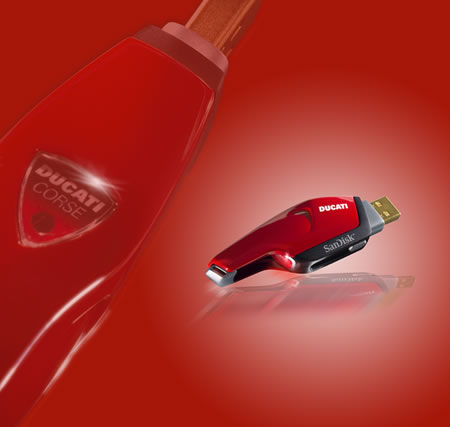 SanDisk today rolled out the sleek SanDisk Extreme Ducati Edition USB Flash Drive. A tribute to Ducati’s distinctive Italian design and engineering, the new drive has the same glossy red chassis and black trim as the Ducati Corse team motorcycles now racking up victories on the MotoGP circuit.The true Ducatisti will appreciate the attention to detail in the SanDisk Extreme Ducati Edition USB Flash Drive, including the Ducati Corse logo on top of the drive and the red tail light that illuminates whenever the drive is inserted into the USB port of a computer .On the inside, the drive offers a generous 4 gigabytes1 (GB) of capacity and front-of-the-pack read and write speeds of 20 megabytes per second – the fastest of the SanDisk portfolio of consumer USB drives. 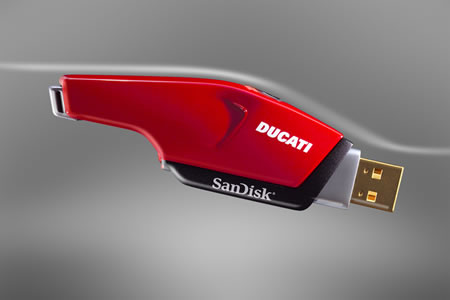 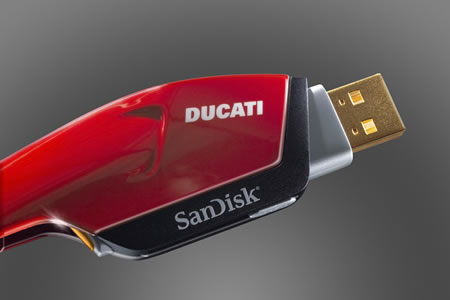 The SanDisk Extreme Ducati Edition USB Flash Drive comes with a custom lanyard, as well as SanDisk’s RescuePRO Deluxe software for recovering data that is accidentally deleted. The drive is compatible with Windows 2000, Windows XP, Windows Vista, and versions 10.1.2 or better of the Mac operating system. The drive has a manufacturer’s suggested retail price of $124.99 in the United States. It is expected to be available in North America and Europe in August, and worldwide in September. It will also be available for pre-order on the SanDisk website at www.sandisk.com/Ducati.