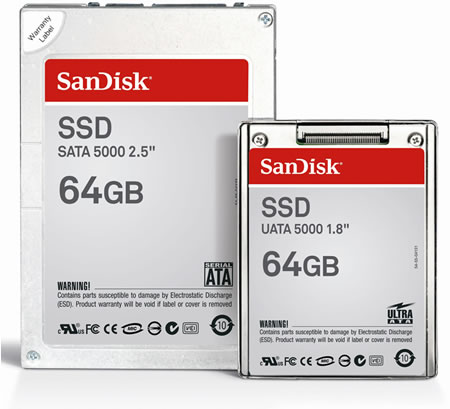 SanDisk today expanded its line of solid state drive (SSD) products with the introduction of a 64GB SSD aimed at both enterprise users and early adopter consumers such as gamers. SanDisk 1.8-inch UATA 5000 and 2.5-inch SATA 5000 SSD products, which already are available in a 32GB capacity, are compatible as drop-in replacements for hard disk drives in most mainstream notebook computers. The announcement was made at Computex Taipei 2007, where SanDisk is showcasing its comprehensive line of storage products for use in industrial and system-level embedded applications.SanDisk SSDs deliver 2 million hours mean time between failures (MTBF), approximately six times more than notebook hard disks. With no moving parts, SanDisk SSDs are also much less likely to fail when a notebook computer is dropped or exposed to extreme temperatures.

Compared to a typical hard disk drive, which consumes 1.9 watts during active operation, SanDisk SSDs consume 1.0 watt (0.5 watts for 1.8″) while active and as little as 0.4 watts (0.2 watts for 1.8″) while idle. This difference in power efficiency is particularly important in extending battery life for road warriors, enabling them to remain productive while in transit.