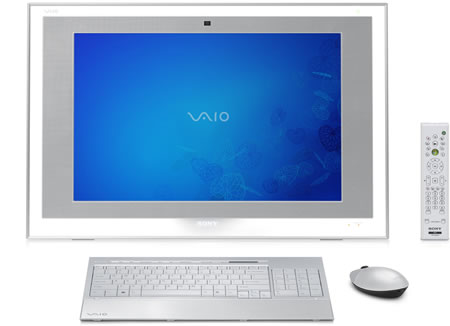 Featuring a floating glass design, the Sony VAIO LT HD PC/TV serves as a computer entertainment center, where you can watch and record analog, digital and cable television programming, including premium HD channels. The new Sony LT PC/TV features a 22-inch diagonal WSXGA widescreen display, with Sony’s XBRITE-HiColor LCD technology. It displays images in razor-sharp detail, whether watching TV, enjoying family photos or simply surfing the web. Part of a series, the new Sony LT PC/TV comes in multiple configurations, including a standard and an HD model. The high-definition version features a Blu-ray Disc optical drive so you can enjoy high-definition movies, as well as record, store and play back personal content on high-capacity BD media (up to 50 GB on a single disc).The Sony LT PC/TV is ideal for anywhere space is at a premium. A unique feature in a PC, the LT model has a mounting capability that allows users to attach a VESA-compatible mount (sold separately) to the unit and hang it on the wall of your bedroom, kitchen, office or attach to your desk. Since the LT PC/TV can be used for television viewing as well as computing functions, an A/V power button lets you shut down the TV function, while your PC continues to run in the background. The model features a built-in 1.3 megapixel camera and an echo-cancelling microphone for crystal-clear video messaging—great for staying in touch with family and friends. For a tidy interior design, the new model incorporates built-in wireless 802.11n LAN technology.

A wire organizing tab on the back of the chassis ensures that wires are discreetly routed, while ample ports are conveniently located on the sides. Wired connections are further minimized with the included fold-up wireless keyboard, mouse and remote control. The Sony VAIO LT HD PC/TV standard model will start at about $1,900, while the LT HD model with a Blu-ray Disc optical drive will go for around $2,900.