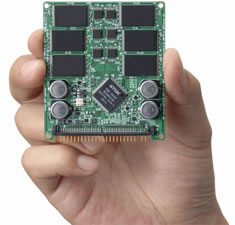 Reflecting the rapidly lowering price of NAND flash memory, PC manufacturers as well as POS (point of sales) system, printer and other embedded product manufacturers are paying close attention to the semiconductor disc as a replacement for the HDD. The compact disc measures 79 x 68.9 mm, about 80% compared to a 2.5-inch HDD.