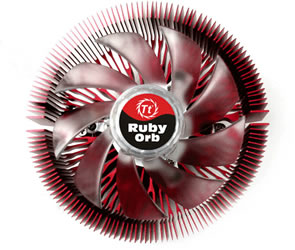 The new Ruby Orb CPU cooler from Thermaltake utilizes an radial dissipation design that is unique in the cooling industry. The numbers of cooling fins multiply as they extend from the center of the Ruby Orb to reduce backpressure on the fan and faster heat dissipation. The y-split fin design allows the Ruby Orb to maximize its cooling fins up to 140 fins at the end to provide extended cooling surface and smooth airflow. The Ruby Orb uses a 120mm ultra-silent fan (1700 ±10% RPM) outputting only 17dBA to let the users enjoy peace and quiet while the computer is performing at its very best. The Ruby Orb includes a built-in red LED clear fan that, when lit with the ruby red heatsink fins, the cooler as whole looks absolutely stunning. 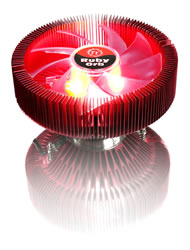 The Ruby Orb CPU cooler with an estimated 30,000 hours life time weighs 545g and is made of entirely aluminum for weight reduction. The Thermaltake Ruby Orb supports Intel’s newest Core 2 Duo CPU and AMD AM2 CPU, perfect for Socket LGA775/AM2/939/940/754 processors. Thermaltake Incorporation, based in Taipei, Taiwan is the global leader Thermal Solution and Thermal Management for PC & Industrial Market.