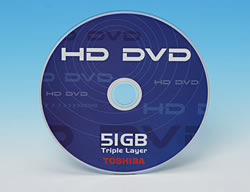 Toshiba Corporation has developed a triple-layer HD DVD-ROM (read only) disc with a capacity of 51 gigabytes. The new disc can store up to 7 hours1 of high-definition video and adds an extended capacity, high-end option to the already extensive line-up of HD DVD-ROM discs. Toshiba aims to secure approval of the new disc by the DVD Forum within this year. The new ROM disc has a three-layer structure, with each layer storing 17GB of data. The advances capacity over current ROM discs, which hold 15GB of data in each layer of a single-sided disc. Continued improvement in disc mastering technology has achieved further minimization in the recording pit, supporting a further boost in capacity to 17GB in single layer and a full 51GB on a single-sided triple-layer disc.